Samacheer Kalvi 6th English Book Back Term 3 Play Solutions/ Answers are given below,

Listen to your teacher read a description of the character from the story. Identify the character based on your understanding and write the name in the space provided. Number the characters in sequence as they appear in the story. 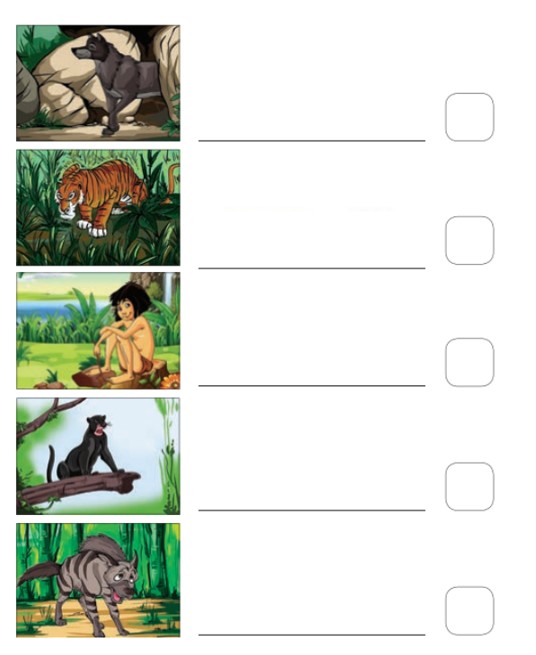 Imagine you are Mowgli. Which animal would you befriend? What kind of adventure would you like in the forest? Make use of the hints below to talk about it.

Read scene I of the play carefully and answer the questions below.

2. The scene is set inside a thick forest and it is nearing dusk. Relate this time frame with the behaviour of the animals in the forest.
Answer:
Father Wolf takes a rest in the daytime and gets ready for his hunt. Mother Wolf protects her cubs by dropping them into the mouth of the cave. Tabaqui also hunts for food at that hour of the day. But he is spiteful and cunning.

5. Whom does Mother Wolf talk about? How does she describe him?
Answer:
Mother Wolf talked about Shere Khan. She said that Shere Khan’s mother called him Lungri (the Lame One), as he had been lame in one foot from his birth. That is why he had only killed cattle. As the villagers of Waingunga were angry with him, he had come to Seeonee Hills to make their villagers angry.

Imagine a conversation among your friends about the four characters in the play Tabaqui, Shere Khan, Mother Wolf and Father Wolf. Use the hints to write it.

Answer:
In scene one, Mother Wolf and Father Wolf enter. Father Wolf gets ready to hunt and Mother Wolf takes protective measures by dropping the cubs into the mouth of the cave. Tabaqui, the Jackal enters from the downhill towards Father Wolf and asks for a meal. It flatters the cubs of the Wolf and warns everyone about Shere Khan, who is going to hunt among those hills for the next moon.

Father Wolf gets angry on hearing about Shere Khan and his hunt among the hills. But Mother Wolf speaks quietly and tells all what she knows about Shere Khan. Tabaqui, who comes there as a messenger to inform about the hunt of Shere Khan, goes away quietly.

I. Read the situation given. Write the response of the subject in a sentence. Tick the correct box to identify the kind of sentences.
D – Declarative; In – interrogative; E – Exclamatory; Im – Imperative 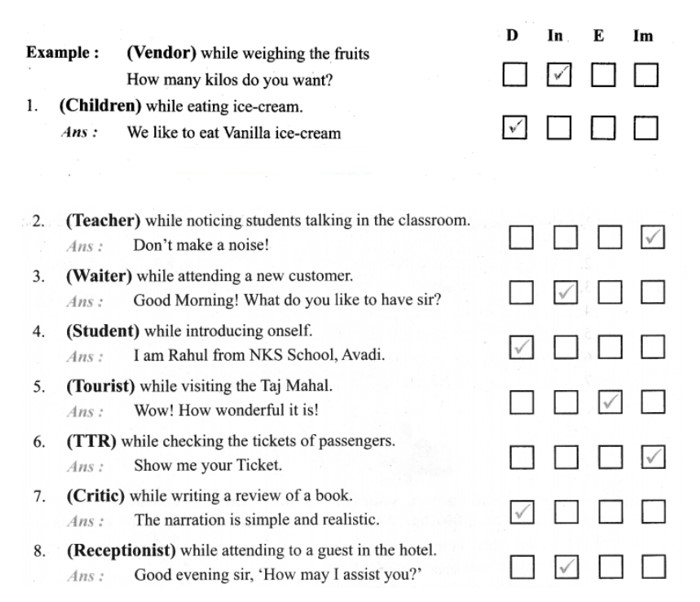 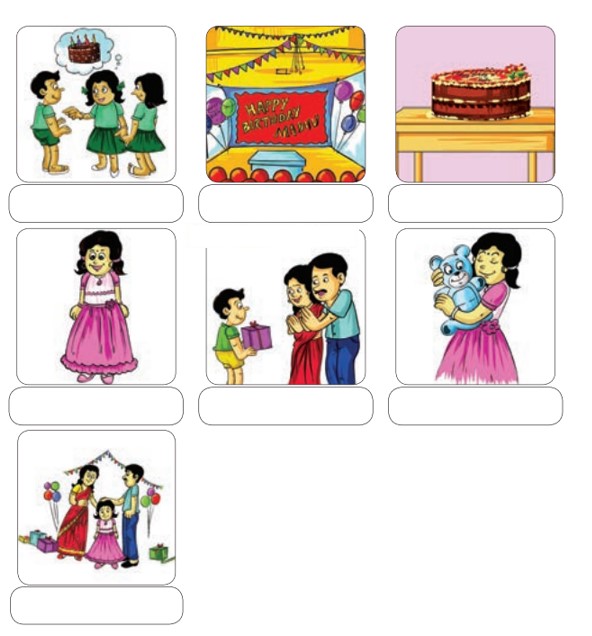 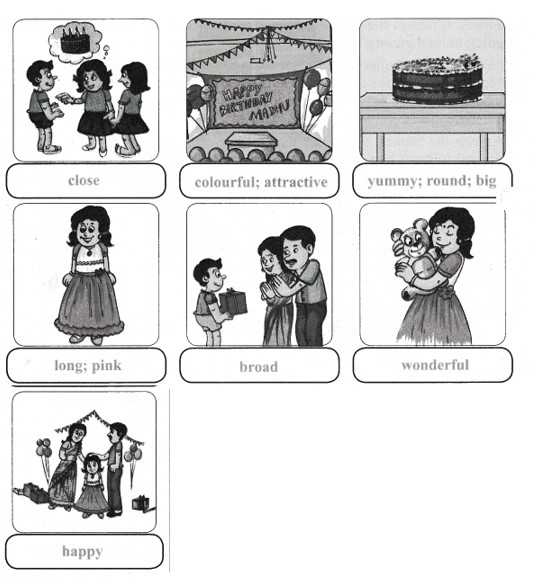 III. Frame as many sentences as possible from the substitution table given below.

IV. Head the sentence, insert appropriate articles In the blanks, and circle the noun phrase.

V. Complete the dialogue by using suitable adjectives in the blanks:

Sinduja: Hi! Venkat. Hope you received the message about our school’s sports day.
Venkat: Hmmm ..! Yes… I was the first one to enroll my name in the events.
Sinduja: So, tell me for how many events have you enrolled?
Venkat: I have enrolled myself only in a few events.
Sinduja: What are they?
Venkat: As I am tall, I have given my name for long jump and running events.
Sinduja: That’s excellent to hear.
Venkat: What about you, Sinduja?
Sinduja: I have decided to participate in all the events.
Venkat: Hey!! That’s good. Expecting the best from you.
Sinduja: Thank you so much Venkat. Wish you the same. Let’s rock.

Read the story given below and follow the instructions to convert it into a play.
Answer:
Title: Goldilocks and the three bears
Characters :

She jumped up and ran out of the room. She ran down the stairs, opened the door and ran away into the forest. And she never returned to the home of the three bears.