Samacheer Kalvi 6th Standard New Social Book Back 1 Mark and 2 Mark Question & Answers PDF uploaded and available below. Class 6 New Syllabus 2021 to 2022 Book Back Question & Answer solutions available for both English and Tamil Medium. Class 6 Geography Book Term 1 Unit 2 – Land and Oceans Answers/Solutions are provided on this page. 6th Std Social Book is of 1st Term consists of 08 units, 2nd Term consists of 07 units and Term 3rd consists of 10 Units. All Units/Chapters of Term 1st, 2nd, 3rd Social Book Back One, and Two Mark Solutions are given below.

Social Subject 1 Mark and 2 Mark Solutions Guide PDF available below. Click the Download option to download the book back 1 Mark & 2 Mark questions and answers. Take the printout and use it for exam purposes.

A. Choose the correct answer:

5. A narrow strip of water that connects two large water bodies
(a) A Strait
(b) An Isthmus
(c) An Island
(d) A Trench
Answer:
(a) A Strait

B. Fill in the blanks:

C. Circle the odd one out 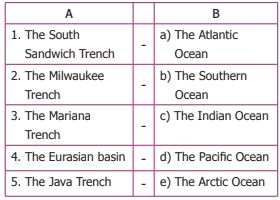 i) Consider the following statements.

F. Answer in a word

1. Which is the highest plateau in the world?
Answer:
Tibetan Plateau

3. Which ocean is named after a country?
Answer:
Indian Ocean

5. What is the deepest part of the ocean called as?
Answer:
Trench

1. What is a continent?
Answer:
The vast landmasses on Earth are called Continents.

2. Name the continents which surround the Atlantic Ocean.
Answer:

3. What are the oceans?
Answer:

4. List out the names of continents according to their size
Answer:

1. A Mountain and a Plateau
Answer:
Mountain:

I. Answer the following questions in detail.

(ii) Asia is the largest continent, whereas Australia is the smallest one.

2. Write a note on plateaus
Answer:

4. Give the important features of the Pacific Ocean.
Answer:

5. Write down the importance of oceans.
Answer: