Samacheer Kalvi 7th English Book Back for Unit 1 Adventures of Don Quixote general and grammar part Question and Answers below:

1. What kinds of books did Don Quixote like to read? What were these books like?
Answer:
Don Quixote liked to read stories about courageous knights and their adventures. These books described the exciting adventures and romances of knights.

2. What effect do the things Don Quixote reads have on him?
Answer:
He was so absorbed in these stories that he never remembered to eat or sleep.

3. Why didn’t Don Quixote believe Sancho Panza when Sancho told him the ogres were actually windmills?
Answer:
Don Quixote placed himself in the adventurous world of knights. So he could not realize the reality.

5. When Don Quixote sees the cloud of dust on the plain in the distance, what does he think causes it?
Answer:
When a thick cloud of dust appeared Don imagined an army marching in their direction.

6. Sancho sees two clouds of dust, leading him to conclude that there are two armies. What does Don Quixote think will happen next?
Answer:
He thinks that the neighing of horses, the sound of trumpets, and the rattling of drums would lead to a battle between the two armies.

(Homophones are two words that are spelled differently but have the same sound.)

A. Explain the difference between these words by making sentences. One is done for you.

(Homonyms are spelled the same way but differ in meaning)

B. Read the following sentences and write the meaning of the italicised words. One is done for you.

1. The bandage was wound around the wound.
wound – injury
wound – past tense of wind

2. There is a fair Arts and Craft fair this weekend,
fair – good
fair – competition exhibition.

3. The woodcutter saw a huge saw in his dream,
saw – past tense of see.
saw – tool for cutting wood.

4. Write the right answers on the right side,
right – correct
right – direction

5. The well was dug by a well-known king.
well – a deep hole that is dug to get water.
well – famous

6. We have march past in March.
march – Walking in a military manner.
March – 3rd month of the year.

7. Can you get me a can?
can – A modal verb requesting permission.
can – a vessel

8. How long will the live fish live without food?
live – living and not dead.
live – remain alive.

9. She has tears in her eyes as she tears old photos.
tears – drops of liquid that come from your eyes.
tears – pull apart pr to pieces with force.

10. I will be second in line wait for one more second. second second
second – number a sequence.
second – duration offime.

C. Divide each word by putting a slash (/) symbol between each syllable. In the space provided, write how many syllables each word has. Use a dictionary if you’re not sure where to divide the syllables.

A syllable is a unit of pronunciation having one vowel sound, with or without surrounding consonants, forming the whole or a part of a word; for example, there are two syllables in water. Wa/ter

D. Listen to your teacher reading a passage on Adventure Trips. Visualize the activities. Draw the scenes in the given boxes.

There is a very famous quote by Helen Keller, “Life is either a daring adventure or nothing.” Adventure trips are all about making memories, gaining more knowledge, learning new things about the surroundings and about one’s own self and making lots of great stories. Going for an adventure camp is the best way to get all of these as it forces one to get out of their ordinary lives and try new things.

Adventure camp basically means spending the nights in tents and doing various activities at the camp-site. There are many activities included in camping to make it more exciting and interesting. Some of these are mentioned below:

Water Activities: If your campsite is near a water body then one can do aqua zorbing, water skiing, fishing, swimming, playing water volleyball, and other such fun games.

Bonfire: This can be done during winter camping. Campers are made to sit surrounding the bonfire and talk about their stories or perform some acts, such as playing some instrument or singing songs.

Rock Climbing: This activity is meant to provide both physical and mental challenges to the climbers and help them in learning new skills.

Mountain biking: Just a few scratches and the trip can be memorable with a new experience of driving bicycles on forest roads.
Answer: 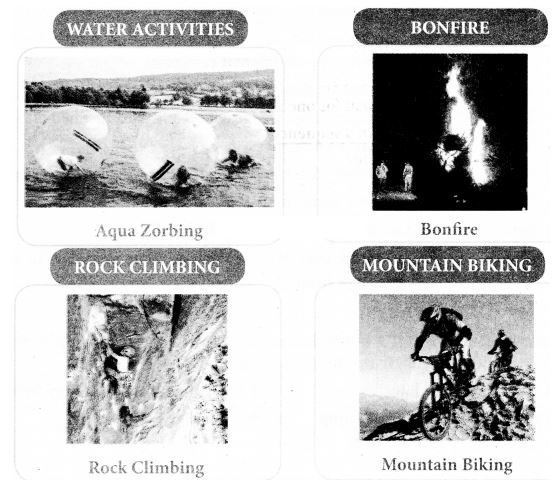 Jack: Don’t you know how simple machines make your life easy?
Jimmy: Um I don’t know what simple machines are.
Jack: Simple machines are mechanical devices for applying force like a wedge or ramp.
Jimmy: Oh! wow! How did I not know this?
Jack: Like the wheels on the hospital bed and IV pole. They help you move people faster by reducing friction.
Jimmy: Is the stick over there that the TV is attached to, is that a simple machine too?
Jack: Yes it is, it’s a lever. ‘The wheels on the bus are simple machines, they make the bus move.
Jimmy: What about the doors?
Jack: Yeah the driver pulls a lever and the doors open and you climb up the inclined plane also known as the stairs. The cable in the elevator is wrapped around a groove in the wheel and axle, an electric motor pulls the cable, lifting the car between floors.
Jimmy: So the wheels on the rolling chair are too by rolling the chair back instead of lifting the chair back.
Jack: Yes they are, they move the chair and reduce the friction.
Answer:
Tom: Simple machines are tools that make our work easier.
Sam: Yes, I do know that. But, do you know that simple machines can be broken down into six different categories.
Tom: Is it so? What are these different categories?
Sam: They are pulley, lever, wedge, wheel and axle, inclined plane, and screw. Wow! What is a pulley?
Tom: It uses grooved wheels and ropes or chains to raise, lower, or move a load. I know that a wedge is an object with a sharp slant.
Sam: Yes. Can you give an example of a wedge?
Tom: Scissors and knives. We use them at home every day. To what category does a see-saw belong?
Sam: It is a lever.

F. Ask the students to tell a story. It may be a true story or an imaginative story. Choose one of the titles from the following.

Answer:
A funny story about my friend.
In the year 2018, my friend had severe eye pain. He consulted many physicians, but none could treat his ache. At last, he approached a wise monk who carefully observed his eyes and offered a very peculiar solution. The monk told him to concentrate only on the green colour for a few weeks and avoid any other colour. My friend was very desperate to get rid of the pain. So he was determined to go to any extent. He appointed a group of painters and directed them to paint everything in green colour. As I was working in his office, I was surprised to see all this.

After a few weeks, the monk came to visit him to follow up on his progress. As the monk was walking towards the man’s room, the appointed painter poured a bucket of green paint on the monk. The monk enquired about the reason for painting everything green. My friend told him that he was only following the monk’s advice to look at only green. At this, the monk laughed and said, ‘If only you had purchased a pair of green spectacles, you could have saved a large share of your fortune. You cannot paint the world green?
Moral: So let us change our vision and the world will appear accordingly.

Think about your story 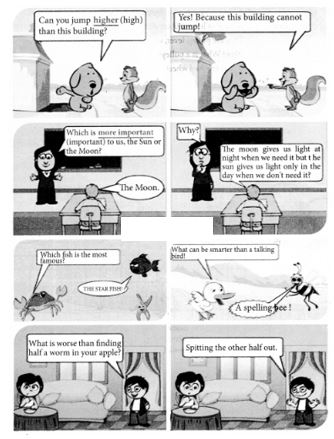 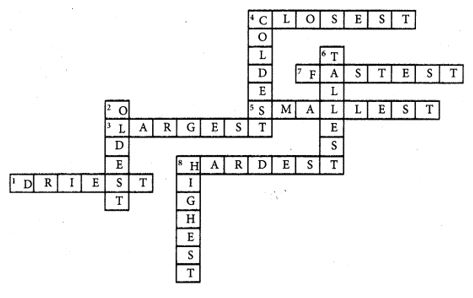 H. Put students in pairs and tell them to interview their partners. To do this they must make questions, e.g. What’s the worst storm you’ve ever seen? They can also ask follow-up questions to find out more information. Do feedback on this as a whole class. Other thematic questionnaires of this kind could be:

Places in your life

I. Write a paragraph comparing Don Quixote and Sancho Panza. The following words will help you to write a compare and contrast paragraph

Answer:
The relationship between Don Duixote and Sancho Panza is an important one. Readers can easily understand that the two characters stand for different things. Don Quixote represents illusion. On the other hand, Sancho Panza represents reality. They complement each other in a dualistic way Sancho Panza was a peasant labourer. He was greedy but kind and faithful. He was also a coward. He is a foil to Don Quixote and virtually to every other character in the story. Don Quixote sees what his mind and imagination create, not what is actually there. He retreats to a world that holds meaning for him. He wants to be a knight in search of his own adventures, winning fame and honour. Unlike Don, Sancho is more practical. He seeks fortune and has a lot of common sense. But he consistently defers his master and assents to dangerous schemes.

Other Important Links for the 7th English Book Back Solutions Guide: