Samacheer Kalvi 8th English Book Subject One Mark, Two Mark Guide questions and answers are available below. Check English Book Back Questions with Answers. Take the printout and use it for exam purposes.

Fill in the blanks:

1. Keelakudi was the native of Vetri.
Ans: – True

3. Vetri and Asif were good in studies.
Ans: – True

A. Choose the correct answer.

2. Vetri came to Chennai to visit his.
a) father
b) friend
c) brother

3. Asif saw his friend through the
a) camera
b) window
c) glas

B. Choose correct synonyms for the italic word.

3. I am living in the outskirts of the village.
a) border
b) outpost
c) center
d) region.

4. Asif quarreled with his friend.
a) fought
b) differ
c) peace
d) fun

2. The vegetables look fresh.
a) rotten
b) dull
c) new
Answer:
a) rotten

3. Vetri had a strong will to start a new business.
a) desire
b) thin
c) weak

4. Vetri was surprised bv his friend.
a) unsurprised
b) expected
c) shocked

5. He spoke nervously.
a) scared
b) confident
c) anxious

D. Answer the following questions in one or two words.

1. How did Vetri lose his properties?
Ans: –
Once Vetri was a successful businessman of Vetri constructions. It was a leading company. His company constructed many complexes, houses, and a few apartments in Coimbatore. After the death of his father, his brothers demanded him to divide the wealth because they wanted to start their business personally. Thereafter it was really difficult for him to establish his business. He took loans to run his company, but he could not pay back the loan. So, he sold his properties in order to re-pay the loans.

2. What happened when Vetri met Asif?
Ans: –
Vetri boarded the train and went straight to Asif’s office. When Vetri was enquiring about Asif, he got a pat on his back. It was Asif, who came to receive Vetri, after seeing him through the CCTV camera. Vetri was speechless. He apologized to Asif saying that he never got a chance to visit Chennai. So he couldn’t meet him at all. They spoke about their school days and the fun they had. They also discussed their business. Asif took Vetri to his home for lunch. Vetri was surprised to see that everyone knows him. In the evening, Asif dropped him at the station.

3. How did Asif show his friendship?
Ans:
By understanding Vetri’s current situation Asif decided to give the project to him. Two days later, Vetri received a call from Asif’s office. They said “Our MD Mr. Asif, has assigned a project to you. He wants to meet you. Will you come to Chennai.” Through this Asif shower his friendship.

A) Change the following into Indirect Speech:

4. The poor man exclaimed, “Will none of you help me?”
Ans: –
The poor man sadly exclaimed that none of us would help him.

B) Change the following into Indirect Speech:

3. “Halt!” shouted the officer to his men.
Ans: –
The officer shouted his men to halt.

4. “Take off your hat,” the king said to the Hatter.
Ans: –
The king ordered the Hatter to take off his hat.

8. “Runaway, children,” said their mother.
Ans: –
The mother told her children to run away.

1. Punitha asked Pushpa what she was reading.
Ans: –
“What are you reading, Pushpa”? asked Punitha.

7. Finally Punitha inquired if she could borrow it.
Ans: –
“May I borrow it?” inquired Punitha.

8. Pushpa replied that she would certainly lend it to her.
Ans: –
“Of course I will lend it to you,” replied Pushpa.

9. The stranger asked Nasrin where she lived.
Ans: –
The stranger said, “Where do you live?”

F) Sherlyn receives a postcard from her friend Pushpa who is holidaying in Sri Lanka. She calls her friend Galen and tells him what Pushpa has written. Help her by filling in the blanks, using reported speech. 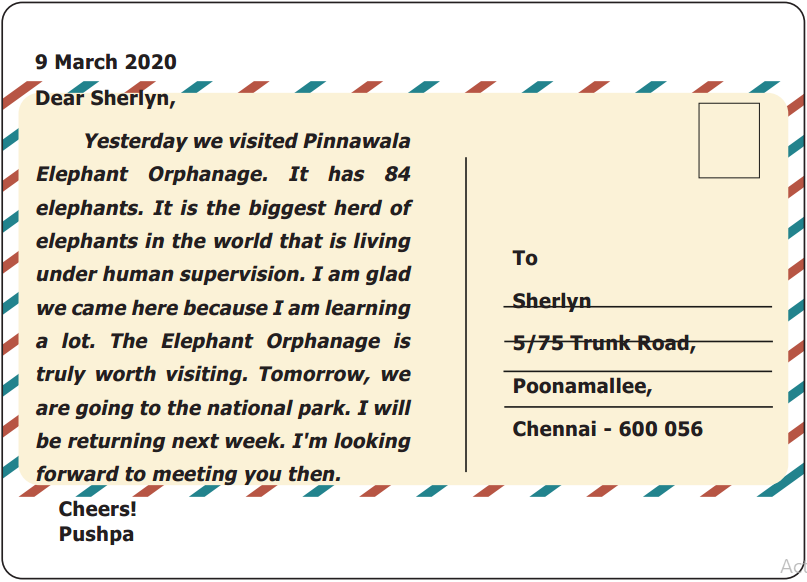 Hello, Galen Today I received a postcard from Pushpa. Remember I had told you that She has gone to Sri Lanka on a holiday? Well, she has written from Colombo. She has written that she had visited Elephant Orphanage. It had 84 elephants. She said that it is the biggest herd of elephants in the world that is living under human supervision. She also added that she was glad that they had come there because she was learning a lot. The Elephant Orphanage was truly worth visiting. She said that the next day. they were going to the national park. She would be returning next week and added that she was looking forward to meeting me. then.

Other Important links for 8th English Book Back Answers: