Samacheer Kalvi 9th English Book Subject One Mark, Two Mark Guide questions and answers are available below. Check English Book Back Questions with Answers. Take the printout and use it for exam purposes.

A. Based on your understanding of the play, choose the correct answer and fill in the blanks.

B. Based on your reading, answer the following in two or three sentences each.

1. Why did Jim run from school?
Answer:
As the river was rising fast, Jim had to run every step of the way from school. The Burnett Dam gave way an hour ago and its condition was very bad.

2. Where was Amy’s mother?
Answer:
Amy’s mother took Dick to the dentist and was going to stop at Mrs. Brant’s for a recipe before reaching home.

3. Why did Amy ask Betty to fill in the water tubs?
Answer:
Amy asked Betty to fill the bowls, tubs, pails, and pitchers with fresh water because the town supply might be cut off or could become unsafe to drink.

4. According to Jim what are the two things that a person should remember in times of emergency?
Answer:
First thing, we must not let others see how scared we are. Next to get all the things together in one place like water, food, blankets, coats, light, etc.

5. Why is Jim climbing on the roof?
Answer:
Jim wanted to be on top of the roof thinking that he would signal for help from the roof. Coast Guard would send a boat to rescue them.

7. Why were they going to sleep in the attic?
Answer:
To save themselves from getting floated along with the rising water, they decided to climb into the attic and onto the roof because they were living in a bungalow instead of a two-story house.

9. Who is the founder of the Junior Red Cross?
Answer:
Jean Henry Dunant

C. Match the following by drawing a line across column A and B. 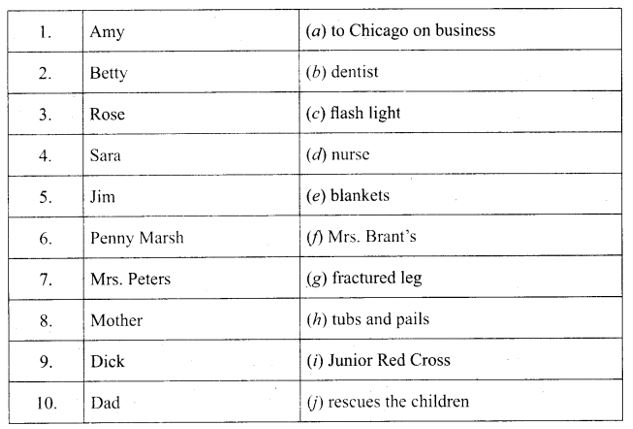 D. Based on your understanding of the text, answer the following in about three to four sentences each:

2. Elaborate on the rescue operation undertaken by Mr. Peter.
Answer:
Tom Peters and Miss. Marsh, a member of the Red Cross Disaster Committee and Red Cross nurse respectively, were on a boat calling out for Mr. Marshall’s family to know whether they were safe. Jim responded and guided the rescue team to know where they were. Mr. Peter was shocked to know’ that there were children and no adults inside the house. When they were climbing down the ladder Sara fell and got hurt. She was wrapped in a blanket. Mr. Peter suggested that more than the pain it is the fear that is not making them function well and asked them to be composed. Sara has broken her right leg just below the knee. They splint it up with pillows and an umbrella to lift her safely into the boat. They took her to the emergency Red Cross hospital in the Armoury.

3. How did Jim prove himself as a good rescuer in the flood situation?
Answer:
Jim Hall a neighbour, came to the rescue of all three girls luckily during the crisis time. Mr. Marshall and Mrs. Marshall were away due to valid reasons – one on business at Chicago and the other on a visit to the dentist along with Dick. Jim Hall acted very wisely by giving all the three girls directions to collect flashlights, fill water, candles and first-aid kit. Jim advised them to climb into the attic and onto the roof because the house they were staying in was a bungalow and not a two-story house. It was dangerous as water might have entered the house anytime.

4. Briefly narrate the happenings of the play in Scene II.

(a) How did Amy manage the situation at home?
Answer:
Amy, Rose and Betty had three candles on the table. Sara was asleep covered with the blanket in a big chair. Betty was trying to read with the help of candle-light. Amy would suggest them to sleep.

(b) How did Marshall save the children?
Answer:
Mr. Peters was carrying Sara and gave her confidence by stating that she was more frightened than hurt. Miss Marsh splint right leg of Sara up with pillows and umbrella just below the knee to lift her safely into the boat. Then they took her to the emergency Red Cross hospital in the Armoury.

E. Using a dictionary, find out the synonyms and the antonyms of the words given below. One has been done for you. 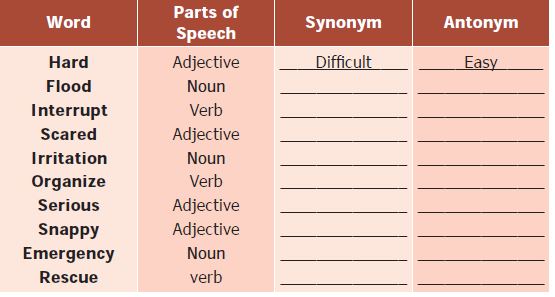 F. Listen to the paragraph and fill in the blanks.

The 2015 South Indian floods resulted from heavy rainfall generated by the annual northeast monsoon in November- December 2015. They affected the Coromandel Coast region of the South Indian states of Tamil Nadu and Andhra Pradesh, and the union territory of Puducherry, with Tamil Nadu and the city of Chennai particularly hard- hit. More than 500 people were killed and over 18 lakh people were displaced. With estimates of damages and losses ranging from nearly 200 billion rupees to over 1 trillion rupees, the floods were the costliest to have occurred in 2015 and were among the costliest natural, disasters of the year. The flooding has been attributed to the2014-16 El-Nino event.
(For listening to the script refer to our website www.fullcircleeducation. in)

A. Identify the dependent clauses or phrases in the following sentences and underline them.

C. Look at the action words in bold. Identify whether they are either finite or non-finite verb.

Other Important Links for 9th English Book Back Answers: