Samacheer Kalvi 9th English Book Subject One Mark, Two Mark Guide questions and answers are available below. Check English Book Back Questions with Answers. Take the printout and use it for exam purposes.

Prose 6 – From Zero to Infinity

A. Answer the following questions in a sentence or two.

1. Why did the students laugh at Ramanujan?
Answer:
The teacher complimented Ramanujan because he had asked a question that had taken mathematicians several centuries to answer.

3. Question What did Ramanujan do after reading the book on Trigonometry?
Answer:
Ramanujan mastered the book and also began his own research.

4. What disappointed Ramanujan’s father?
Answer:
Ramanujan failed twice in his first-year arts examination in college as he neglected other subjects such as History, English and Physiology. This disappointed his father.

6. Why was Ramanujan’s application for jobs rejected?
Answer:
Ramanujan would show his frayed notebooks to every officer. But no one could understand what was written in the notebooks. So, his applications for jobs were rejected.

B. Answer the following questions in about 80 -100 words.

1. Describe the life of Srinivasa Ramanujan in India.
Answer:
Ramanujan was born in Erode in Tamilnadu on December 22,1887. From early childhood, it was evident that he was a prodigy. Senior students used to get his assistance in solving math problems. At the age of 13, he began his own research on Trigonometry. The book “Elementary Results in Pure Applied Mathematics” by George Shoobridge Carr triggered the genius in Ramanujan. He used to do problems on loose sheets and enter the results in notebooks which are now famous as “Ramanujan’s Frayed Notebooks”.

Although Ramanujan secured a first class in Mathematics in the matriculation examination and was awarded the Subramanyan Scholarship, he failed twice in his first year arts examination in college as he neglected other subjects such as History, English and Physiology. He searched for job for food and papers to do calculations. The Director of Madras Port Trust gave a clerical job to Ramanujan on a monthly salary of Rupees 25.

2. Narrate the association of Ramanujan with G.H. Hardy.
Answer:
Ramanujan sent a letter to the great Mathematician G.H. Hardy of Cambridge University, in which he set out 120 theorems and formulae which included the Reimann Series. Hardy and his colleague Littlewood realized that they had discovered a rare mathematical genius.

They invited him to Britain.Despite the cold weather and food, Ramanujan continued his research with determination in the company of Hardy and Littlewood. Hardy found an unsystematic mathematician in Ramanujan due to his lack of formal education. Ramanujan’s achievements include the Hardy-Ramanujan-Littlewood circle method in number theory.

C. Match the words with correct Synonym and Antonym from the table. 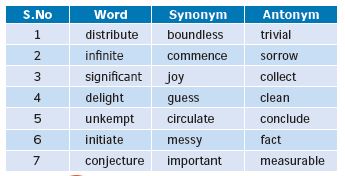 A. Complete the following sentences using appropriate Connectors from the box.

2. This restaurant has some of the best chefs in the town.__________ their service is excellent.
Answer:
Moreover

6. The store was out of chocolate chips; __________ they would need to make a different type of cookies.
Answer:
therefore

B. Convert the following active sentences into passive sentences by supplying an appropriate passive verb form.

1. Stanley will inform you later.
Answer:
You will be informed by Stanley later.

6. Carry it home.
Answer:
Let it be carried to home.

7. They are decorating the wall.
Answer:
The wall is being decorated by them.

Other Important Links for 9th English Book Back Answers: