Samacheer Kalvi  8th std Social Subject 1 Mark and 2 Mark Solutions PDF available below. Click the Download option to download the book back 1 Mark & 2 Mark questions and Solutions/Answers. Take the printout and use it for exam purposes. Samacheer Kalvi 8th Social Science History Chapter 2 Questions and Answers is given below.

Chapter 2 – From Trade to Territory

I. Choose the correct answer

8. Who signed the Treaty of Bassein with the British?
(a) Bajirao II
(b) DaulatraoScindia
(c) SambhajiBhonsle
(d) SayyajiraoGaekwad
Answer:
(a) Bajirao II

9. Who was the last Peshwa of the Maratha empire?
(a) BalajiVishwanath
(b) BajiRao II
(c) BalajiBajiRao
(d) BajiRao
Answer:
(d) BajiRao

10. Who was the first Indian state to join the subsidiary Alliance?
(a) Oudh
(b) Hyderabad
(c) Udaipur
(d) Gwalior
Answer:
(b) Hyderabad

II. Fill in the Blanks 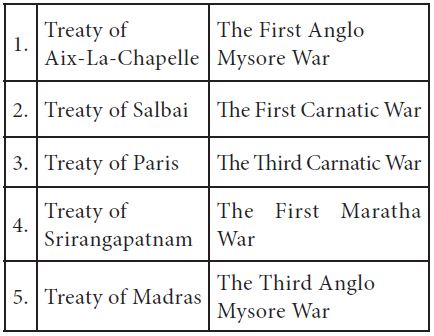 1. After the death of Alivardi Khan, Siraj – ud – doula ascended the throne of Bengal.
Answer:
True

4. Sir Elijalmpey was the first Chief Justice of the Supreme Court at Fort William in Bengal.
Answer:
True

5. The Police system was created by Lord Cornwallis.
Answer:
True

V. Which one of the following is correctly matched:

VI. Answer the following in one or two sentences

3. Mention the causes for the Battle of Buxar.
Answer:

4. What were the causes for the First Mysore War?
Answer:
Causes:

5. Bring out the results of the Third Maratha War.
Answer: